A few weeks ago I wrote about attending an Essex Book Festival event for Alexander McCall Smith and noted that I also had managed to get tickets to see Jodi Picoult speak.  Since enjoying Mr McCall Smith so much I have been waiting feverishly for the event date to arrive, which it did last night.
And we were not to be disappointed.  Although the format of the evening was very different to the first one we attended, Jodi was just as confident, engaging and inspiring.  Firstly she outlined and read from her latest published novel 'Lone Wolf' and I have to say I think I could have sat and listened to her read the entire novel.
She then spoke about the in depth research she had undertaken for the book, spending time with Shaun Ellis at The Wolf Centre in Devon and shared some of the information she had learnt about Wolves (and any pack related animal).  This may sound a little strange, but believe me when I say, the audience was entranced, until she asked for 3 audience members to participate in a Wolf Cry experiment and then we were amused!
Finally the floor was thrown open to questions, a good selection were asked to which Ms Picoult answered without missing a beat.  Questions ranged from 'How old was she when she started writing?' - Answer 5 - to 'How did you get access to the Amish research for Plain Truth when they are such a closed sector - Answer : Slowly.
She also set the record straight on the age old question 'What happened with the ending in the movie of My Sisters Keeper?'  The answer to this, ultimately she sold the rights and thus creative control, although before selling them all the important movie bods agreed that the one thing that had to stay the same as the book was the ending.  She was called weekly while the screen script was being written and was happy that it was staying true to the book.  She then got a call (from a fan that happened to see a copy of the script) to alert her, the ending had been changed.  Then the movie people would no longer take her calls, and after a desperate attempt to make them realise their mistake she flew to the set, where she was physical removed.  She contacted other people related to the movie and warned them they would lose serious money by compromising the ending, but no one listened.
The result was that the movie did lose money.  Jodi Picoult fans were disgusted and since she made that call and was right, movie opportunities that have since arisen have been offered with a co-producer or similar type role, meaning she will have some degree of creative control.  This I believe, will definitely be for the good of the movie.
After the amazing talk, the whole auditorium queued to get their purchases signed by the lady herself.  I usually don't get flustered by the 'Well Known' but I must have been in awe because all I could muster when she asked in her American twang 'Hey, how are you today?' was a giggle that a school girl would give a boy band.   Embarrassing?  Just a smidgen... 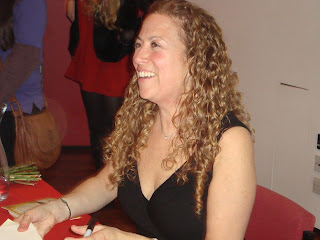 The Jodi Picoult talk was the last of the Essex Book Festival events for the year and what a way to end, I can not speak highly enough of them.  Roll on the schedule for 2013.
Posted by Lynsey Summers