What Has Made Me Cheerful This Week?

The six weeks holidays however, have once again flown past in the blur of an eye and now we are in preparation mode for getting J1 ready to go back to school.  I can see 'regular routine' within touching distance.  Stepping out of routine is and has been lovely.  But I also enjoy it and feel both myself, but moreover the children, are starting to crave it again now.

This week in particular has been packed out with with moments to be cheerful about however, so I wish the boys to have it recorded in our memory box.

1. We attended the two days of flight frenzy fun that is our local Airshow.  J2 in particular is hugely into aeroplanes and helicopters at the moment and he was in his element.  We also had great weather (unlike last year) so were able to make it two full beach days.  We were up and out early as we had handpicked one small section of the beach that would be suitable for both J1 and J2.  A difficult task.  It (luckily) is also the best spot from which to watch the displays, but armed with this knowledge know how busy it gets, so knew we would have to be the early bird to catch the worm.

On day two The (mighty) Red Arrows were opening the display.  The other thing about the spot we were camped on is that the audio commentary area is broadcast from an elevated area directly behind it.  I got wind that The Arrows team member 'Red 10' was up on the balcony so was trying to snap a photograph of him.  They were not very successful and then he disappeared from view.  I kept looking up to see if he had returned to his viewing area (he would be watching the display and giving the descriptions of what the crowd was seeing) but to no avail.  Giving up gracefully I proceeded to pour sea water on J1's hot feet from the buckets my mum and J2 had been kind enough to bring to us.

I would never had predicted what was about to happen next.  As J1 whooped with delight at the cold liquid hitting his little feet a voice said 'Hello!'  I turned around to find Red 10 standing behind J1's chair 'Someone said that you were trying to get my attention so I thought it would be easier for me to come to you.' he continued.  Still quite stunned I explained (read 'squealed') that both my boys love aeroplanes and I had been trying to get a photograph of him to show J1.

He knelt down to J1's eye-level, a gesture that means so much and addressed him directly.  J1 asked him what his name was 'Mike' he replied 'I am a member of the Red Arrows.'  They had a very coherent conversation of which I was very proud and touched by.  Then he said 'Let's take some photos of us together.'  I snapped away, praying that I would get a good one.  He then got a signal that the Arrows were mere minutes away and departed to undertake his role within the display.

To say it made our day is an understatement and I was moved by the act of genuine kindness.  Not only from Mike 'Red 10' but the man that alerted him to the fact that a young boy was unable to see him from where he was.

And I was most pleased with the photos! 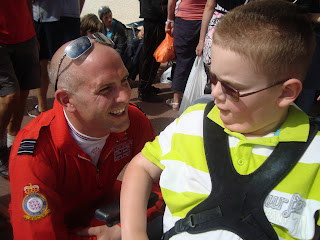 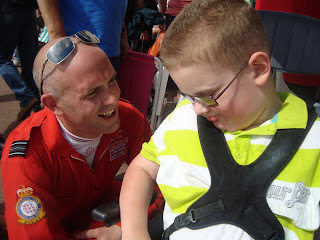 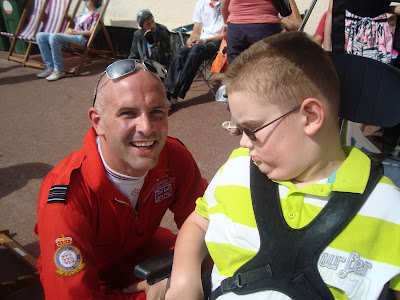 2. After two weeks rest and an appointment with a sport physiotherapist (with some minor treatment and lots of advice about Patella Tendon injury) I was given the all clear to run.  This was just in time for the final Summer Series 5K I have been participating in.  I didn't realise just how much I had missed pounding the pavements!
3. The Paralympics have started to an amazing reception.  I am as avid a fan and watcher as I was for The Olympics and can not wait for Wednesday when we are off to see the Athletic action LIVE!  Roll on Wednesday and some - overly excited - written blog posts about it.
4. I started the 'Fiction' section on this blog.  This was a big decision for me, as it is very much putting myself out there for criticism and I am not sure how I will handle that when it invariably happens.  However, it is what I need to do if I ever want to seriously getting into the world of writing.  I think I certainly add it to my list of 'Things To Do That Scare Me.' for this year.
5. We are slowly but surely getting on with researching everything we need to do / know / find out with regard to taking J1 on a holiday of a lifetime.  We are also doing well with being proactive with getting demo's for bikes / wheelchair power packs / mobile hoists booked in.
6. We had a lovely family day out at the Zoo yesterday.  Our local Zoo has both a Changing Place and a fully wheelchair accessible land train, which J1 and J2 both adored.  We also managed to get brilliant deals on the Gold Card so can now visit whenever we like for a whole year.
For other cheery souls this week hop over to Mummy From The Heart!
﻿
Posted by Lynsey Summers