A few weeks ago I mentioned that I was giving some consideration to running another Marathon.  Having the experience of running the London Marathon in 2006, I believe that as well as physical training and stamina building I would have benefited greatly from also doing some Mental Stamina exercises.


Therefore I noted that I wanted to start to try to do things that I would normally be 'too scared' to do.  The first thing I mentioned I might do, to kickstart the 'Face My Fears' campaign was to book myself onto the Aerial (High Wire) challenge whilst on holiday this year.


So on the (very wet) morning of Wednesday 4 July that is exactly what I did.  Sporting a rather fetching bright orange helmet and some bad frizzy swimming pool hair I donned the safety harness and took the steps to the first part of the Aerial Adventure.


I must say now, the photographs do not really give justice to the height of the course.  It feels higher than it looks to the naked eye from the side line.  When dealing with something regarding heights people say 'Don't look down' but with this there is no option.

After the first challenge of walking a balance beam style implement,  I clung on to the next tree I came too for so long that the instructor came over and asked me if I was stuck.  Physically no.  Mentally yes. 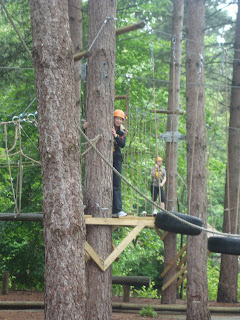 
This was the point.  This was the reason I had decided to do the whole entire experience in the first place.  To be feeling that emotion of undulating fear.  To get to that point where all I wanted was to say 'I'm not a celebrity but get me out of here anyway!'

Clinging to that wet tree I looked at the sodden, slippery tyres that awaited my feet to be placed on them.  The instructor advised me to place my weight forward on them, as that was the best way to control the movement.

I told myself it was all in the mind.  Like the fatigue when you think you can not run anymore, yet you find yourself a mile along and you are still going.  I told myself to think that I was only a foot off of the ground, it would still be wobbling the same.  I was perfectly safe and harnessed on.  I was going to finish the course.

I made my decision I stepped off ... 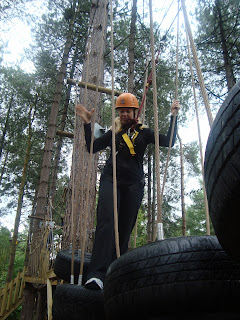 Breathing a sigh of relief, I reached the next tree I found myself at the first of the zip-wire.  Now this I had actually been looking forward to.  Since my days of watching 'The Assault Course' on the Krypton Factor I had wanted a go on a zip-wire.  It was awesome.  Even though I did have to swing myself several times at the end to get onto the landing platform because it was so slippery.

Once I had surpassed that moment prior to the tyres; where I looked at my fear, looked at the steps down to safety and ignored them, although I wasn't exactly thrilled at each challenge I completed it.  The hardest part, probably traversing the climbing wall as the ridiculously small hand / foot holds were so slippery. 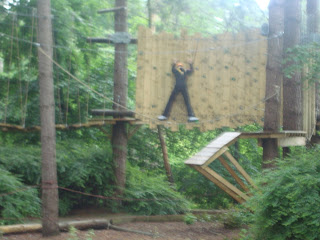 Before I knew it (actually that is a lie, I was counting down the challenges to the end) I was back at the starting platform.  I had achieved what I set out to do.  Could I have done a higher challenge?  Certainly.  But achieving what I did with my fear of heights was a pretty big feat.  Did I enjoy it?  Not particularly.  Am I pleased I did it? Abso - bloody - lutely. 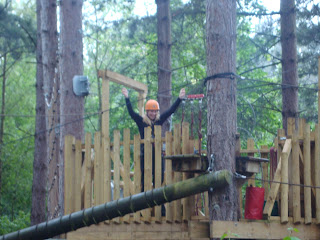 Relief at the finishing point