As previously mentioned in past blogs J2 turned 2 this week.  Many people fear their child turning 2, but considering J2 has been having 'The Terrible Two's' syndrome since he was about 9 months old, for me it was no scary matter. 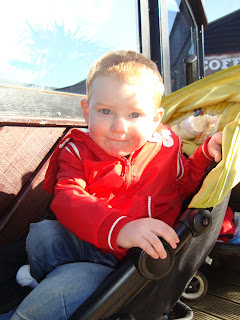 J2 looking not so scary...
Having secured the knowledge that The Hubby would be able to 'work away from the office' I set about thinking about a suitable birthday activity for J2 to indulge in.  As it was Thursday we would be dropping J1 to school and then would have about 5 hours to spoil J2 with some one to one time.
I sometimes have a hard time separating myself from my J1 thinking, of places we can not really go to, or avoiding activities / places that might 'upset' a sensitive child.  I have to remind myself that J2 is fully able bodied and a typical 2 year old who wants to charge around and have pure and carefree fun thus we can go and do all those things that I so desperately wanted to be able to do with J1 for all those years.
Although we try not to impose restrictions on what we do with J2, we try and make the weekends 'family time' and sniff out activities that we can all enjoy, and sadly, that means that a lot of places that J2 could enjoy we rule out because J1 won't.  And sometimes that just isn't fair to J2.  I do not say that in any way complaining, as J1 is getting older, his sensitivity issues are getting much better and we can not go to places that at one time I would never have dreamt we could (because of noise for example) but I have just got so used to not being able to do run of the mill things, and having to think / find J1 suitable trips etc that I sometimes forget that I can do all of those things for J2, and more importantly, should.
So I decided that a trip to Colchester Zoo would be ideal for J2.  I know that it is big, but not too big, it has fantastic indoor and outdoor play areas as well as the vast array of animals and they are forever improving and extending enclosures, so it really does feel like your money is going back into the good of the Zoo.  Plus it is only a relatively short drive and I hadn't been there for years (the last trip had been an attempt at taking a very young J1 and he created hell most of the way round...).  After the beginning of the week gave us appalling weather, it was up in the air until the last minute as to whether would go, but fortunately Thursday dawned bright and dry, if somewhat chilly.
I can confidently say J2 absolutely adored it.  We could let him out of the buggy to run his little legs off for most of the day, as being a week day in term time it wasn't too busy.  In fact it was ideal, most of the other patrons also had toddlers running riot so we were like one big 'knowing and sympathetic' group.
I think J2's favourite part of the day was visiting the penguins, we could barely drag him away. 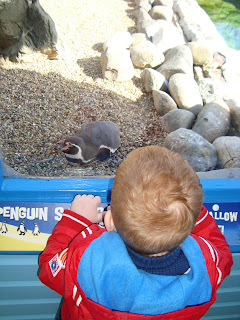 Followed by the playground... 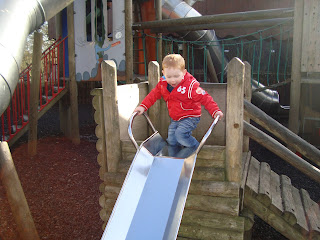 But the biggest bonus of the day (for me) was discovering some brilliant baby changing facilities (including baby changing in the male toilets too) and (cue exciting music) they have an 'Adult Changing Facility'.  This is like finding the 'Golden Ticket' to us.  So we will be going back soon with J1 in attendance, as I think he would also really enjoy it now, and if that goes well Gold Passes might feature in their Christmas presents this year.
Posted by Lynsey Summers