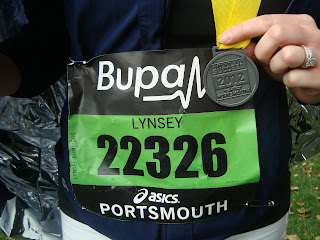 As I have written about on many occasions, a few months ago I started running again.  This has been beneficial to both my physical and mental health.  I had to have a goal however.  I decided that I would not have the time, this year, to commit to a Marathon although I did give it serious consideration.

Instead I opted for two shorter races.  The BUPA Great South Run in Portsmouth (10 miles) and then a local Half Marathon (13.1 miles) in March 2013.  Along the way I have participated in various 5K and 10K races.  I watched the countdown clock on my Run Keeper account ticking down the days to the BUPA GSR and finally on Sunday 28 October 2012, it arrived.

Much planning, besides the running training, had been undertaken for this race.  It wasn't local to where I live so we had hotels to book.  The idea originally was that we would all go along for the weekend, myself, The Hubby, children and my parents.  Then my parents decided instead, to gift us a child free weekend.

So once child-care was in place, hotels secured, running information received, kit and weekend bag packed, route established, dog taken to her 'holiday retreat' (my cousin who would secretly like to keep her) we set off on a chilly October Saturday.
After a short detour (The Hubby always 'just has to do ... (something)' we arrived at our hotel in Portsmouth.  An upgrade to a suite received thankfully we dropped our stuff and heading for some food in the bar.  Whilst here, The Hubby started to chat to the only other patron in the area, and it turned out he was the snooker player Tony Drago.  The World Seniors Tournament was taking place not far from our hotel and he was due to play his match that evening.  He was a very interesting and genuine chap and we had a very pleasurable couple of hours in his company.
We decided on having dinner in the hotel restaurant as I wanted an early night before the big day.  I was in bed by 21:00 but did not sleep great.  I was very conscious of not getting the timing of the day wrong due to the clocks going back.  However, I felt good on Sunday morning and after a good breakfast we headed out early to make our way into Portsmouth, having been given fair warning about the amount of traffic that comes into the City for the race.
The morning was bitterly cold, but because we were early we got a good parking space quite near the start of the race.  This meant I could stay in the car, in the warm, until the last minute.  The race participants were divided into colours, Orange, White, Green, depending on what time you had indicated you could complete the race in.  I was in Green, the final group.  However, we watched the Elite Men go - started by Dame Kelly Holmes.
It was great being in a big race again.  I forgot what the energy of a crowd of runners can do for you.  There was the 'warm up' - which resulted in everyone being in fits of laughter as there was no room to do any of the 'limbering up' that was being indicated for us to do.  Then there was cheering as the crowd slowly moved forward towards the start line.
It was a good route, very flat and support for the duration.  We took in the sites of the The Spinnaker, The Victory, The Boat Yard and other tourist attractions.  They had various bands situated at markers to lift spirits, I think my favourite was the African Drums, they were very powerful.  I wanted to stop and listen to them though. 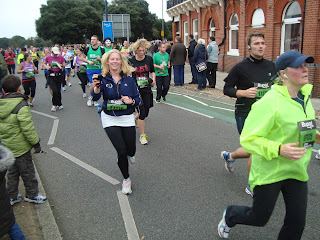 Luckily I saw The Hubby at around the half way point and was able to give him my hat and gloves.  It is always lovely to see your loved ones on a race.  I was feeling really good until about 12K.  Then I had to have a sweet burst to help with the energy levels.  I decided to do a mile of a few minutes running, one walking to conserve the energy I had left to ensure that I could run the full last mile.
Seeing mile 9 felt great, and as always the support increased in the home stretch.  As much as I was hurting by this point, I kept on going and thought about the full body massage I had booked for later that day!  As I crossed the finish line, the big clock was showing 01:59:02 so I was thrilled to have completed my goal of finishing within two hours.  However, when my actual time was text through (within minutes of finishing to both mine and Hubbys phone) it was actually 01:54:46.
On returning to the hotel I enjoyed a deep, hot bubble bath before a very luxurious full body massage.  We then opted to be super lazy and order room service and a movie (a rare treat) before I had the best nights sleep I have had for ages.  A leisurely morning followed by an afternoon of sorting out J1's birthday presents was the end to a lovely weekend.
For anyone wondering if they should do a big race, I would recommend this one.  A flat and friendly route in a lovely City. 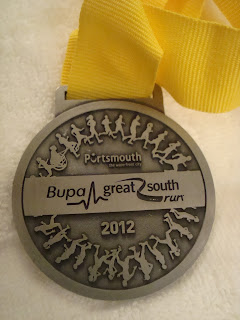